GREEN EVENT: Beyond Green Jobs - A Lecture by Van Jones 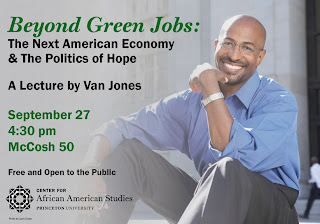 Former White House advisor Van Jones will give a lecture titled "Beyond Green Jobs: The Next American Economy and The Politics of Hope" at 4:30 p.m. Monday, Sept. 27, in McCosh Hall, Room 50, on the Princeton University campus. The talk is free and open to the public.

Jones holds a joint appointment at Princeton as a distinguished visiting fellow in the Center for African American Studies and as a visiting lecturer in the Program in Science, Technology and Environmental Policy at the Woodrow Wilson School of Public and International Affairs.

"We live in a time of both ecological and economic crisis; jobs prospects are going down and global temperatures are going up. The economy that failed us was characterized by consumption, excessive credit and ecological destruction," Jones said. "The next American economy should be characterized by production, thrift and ecological restoration. But can our political system meet the challenge of helping America transition to a green economy? Or will a politics of fear ultimately derail the politics of hope?"

An expert in human rights and the clean-energy economy, Jones is a co-founder of three non-profit organizations: the Ella Baker Center for Human Rights, Color of Change and Green For All. He also is the author of the book "The Green-Collar Economy." He served as the green jobs advisor in the White House in 2009.

Jones currently is a senior fellow at the Center For American Progress and a senior policy advisor at Green For All.

For information regarding this event, please contact Jennifer Loessy at the Center for African American Studies at jloessy@princeton.edu or (609) 258-3216.

*Media interested in attending the lecture must contact Jennifer Loessy at the Center for African American Studies by emailing jloessy@princeton.edu no later than 5 p.m. Sept. 23.

Posted by DuEwa Frazier, Writer and Founder at 11:24 PM No comments: 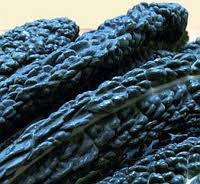 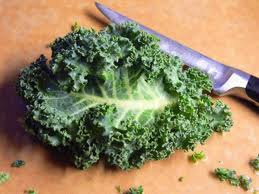 I've been eating kale since I was a kid, but it wasn't until after college when I embarked on a vegetarian diet that I realized the "power" of kale. The nutritional value of kale is what makes it a super green. Kale greens are loaded with Vitamin A, Vitamin C, Iron, fiber, Potassium, Calcium and other necessary minerals. Not everyone likes to or knows how to prepare kale. It's one of the heartier greens that doesn't soften up quickly like spinach, during cooking. For years I washed my bunches of "curly" kale and just dropped them in a pot of water, along with onions and garlic powder. Now I like to "activate" the good taste and nutrition of the greens by either eating them raw (along with chopped onions, carrots and garlic) or sauteeing them lightly. Tonight, my greens of choice for dinner was lacinto kale. Lacinto kale, also known as "dinosaur" kale has a more bumby, textured leaf and is usually a deeper, darker green than curly kale.

Here is a simple, yet yummy recipe for lacinto kale that I prepared tonight.

Wash and rinse lacinto kale leaves. Cut the stems. Chiffonade your kale greens (stack the leaves, roll them up, then cut them into long, thin strips). Place greens in a skillet on stovetop. Add 1/4 cup water followed by 1 tbs apple cider vinegar. Chop 1 garlic clove and sprinkle over greens. Season greens with Mrs. Dash table blend or other unsalted seasoning blend. Turn stove on to low. Cook greens on low heat. As your greens begin to cook, add 1 tsp olive oil (if you prefer, you can add the oil after the greens have cooked). With your cooking utensil, mix and saute greens for 3-4 minutes. Do not overcook. Greens should still have a slight crunchiness, yet be well immersed in the apple cider, olive oil and water mix. Serve warm. Enjoy!
Posted by DuEwa Frazier, Writer and Founder at 7:35 PM 1 comment:

Want to stay bug-free while basking in the sun and participating in your favorite outdoor activities? Here are several products that may keep the bug bites away without all of the harsh chemicals:

Posted by DuEwa Frazier, Writer and Founder at 4:33 PM No comments: 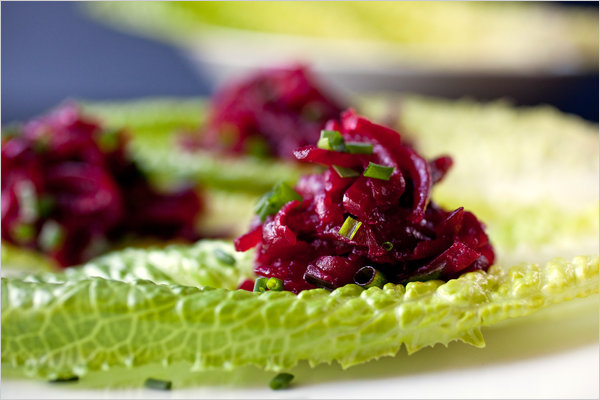 I love beets because they have a sweet, earthy taste. I like to buy them in bunches. You can store them for weeks in your refrigerator and they won't go bad. This is one of the veggies that can stain your hands a bit, but the nutrients you'll get from eating them is well worth it! Here's a great recipe!
Posted by DuEwa Frazier, Writer and Founder at 4:26 PM No comments:

RECYLE: What to do with those old cell phones and computers 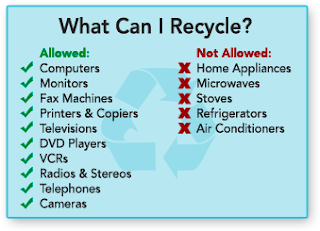 Have you ever wondered how you should *responsibly* recycle old, broken and otherwise unwanted cell phones, printers, computers, and other electronics? I've been waiting to find the nearest place to drop off such items. Over the years I've accumulated four cell phones that I no longer use, and yes I've been saving them for the day that I finally recycle them. Not to mention, the old printer I have that no longer works, and tons of old CDs, DVDs and a broken digital camera. My precious greenies, there's hope for those of us who continue to save these old items, resulting in unneccessary clutter in our homes. It's time to do the right (green) thing and recyle them!

If you're in the NYC area, you can drop off the above items for recycling on July 10th at the Electronics Recyling Event at TekServe. If you live in a different area, by all means, go online search "recycling cell phones and computers" for the nearest drop off point.

Posted by DuEwa Frazier, Writer and Founder at 10:26 AM No comments:

PeaceKeeper's new YUM Glazes are USDA-certified 95% organic, making them FOOD-GRADE. Made with real organic fruit flavors (Citrus, Raspberry, Strawberry, and Blueberry), they create a delicious fruity, glossy glaze on your lips--perfect for wearing over lipstick for a little extra shine or on their own for a gorgeous fresh-faced look!

Mega Balms are almost double the size of PeaceKeeper regular balms (0.25 oz versus our regular 0.15)! They are made with organic flavors such as Spearmint, Chocolate, RoseBerry and organic stevia, an all-natural, long-lasting sweetener from the and Stevia plant that’s an amazing sugar substitute. They’re extra-tasty and extra-eco-friendly, and guaranteed to keep your lips moist, smooth, and nurtured—even in the Summer heat!

Posted by DuEwa Frazier, Writer and Founder at 9:26 PM No comments:

Posted by DuEwa Frazier, Writer and Founder at 8:59 PM No comments:

World of Organic, Natural and/or Reusable Products and Services